When the weather finally broke, it did so with conviction. Two weeks of perfect weather announced spring’s overdue arrival. At the Sullivan House, it meant open windows, and open doors. The safety gates I installed at both sets of porch stairs plus a backyard privacy fence means the dogs get free range from the front porch to the backyard in warmer weather.

As plants and weeds started poking out of the ground, we quickly pivoted priorities to landscaping before it could get out of control. Our mantra is low-maintenance. Anyone who visited us frequently in Warren knows how overwhelming that yard was (double lot, huge hedges, huge beds, and a pond). We can tackle projects, but everything falls apart when it’s time for regular maintenance. We all hate mowing the lawn. Overgrown lawns and hedges were hallmarks of our previous home.

So my plans to sod our backyard disaster here didn’t ring true. We still had ivy around the perimeter and the south side of the yard was still mostly covered by it, but it was largely crushed by the backhoe and subsequent foot traffic in the central part of the yard. Thistles had come last year in force and it took days to beat them back. Sod seemed the obvious solution, but I felt like that much more lawn would put us back into motored lawnmower territory.

I started searching the Internet for backyard landscaping ideas that fell within our Do It Yourself capabilities and tight budget. On March 30, this is the picture I found and immediately emailed to Aaron:

Lots of foliage surrounding a graveled fire pit-centered social space. It was all the great parts of the patio at the Beierman House minus the massive maintenance of the pond and poured concrete (I have a personal vendetta against poured concrete – it is 1950s suburbalicious, which is the opposite of the Sullivan House). I described my idea for the yard as “I want it to look like nothing’s changed in the yard in decades – like maybe it’s always been this way.” That meant nearly everything from the Patio section of Home Depot was out. I rolled the old barrel out of the carriage house, used the paint-peeled concrete planters along the house, and reused bricks from the yard and deconstructed chimney to line the ivy beds. I bought natural wood trellises for the giant rose bush so they would weather quickly. Then I stumbled on my best find: used bourbon barrels cut in half to become planters. They looked beat up and filthy, and stank of bourbon. Perfect.

We dumped six cubic yards of pea gravel over commercial-grade weed barrier, installed a rain barrel, and hung 200 feet of 5-watt string lights. We planted perennials in the barrels and anywhere the ivy was bare. A few chairs and a fire pit in the middle, and it’s now the greatest nighttime space of the Sullivan House. 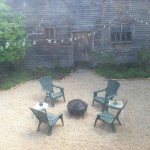 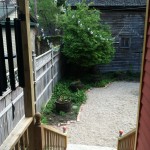 View from the backdoor. 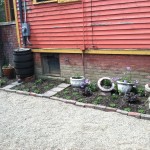 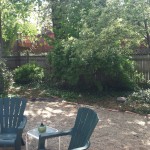 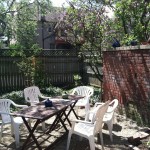 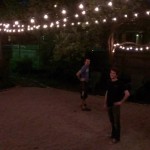 We still have more to do, but the backyard is now an awesome multi-use space instead of an unusable mud pit. Our next adventure is the basement. More on that soon.

One thought on “Spring breaks”