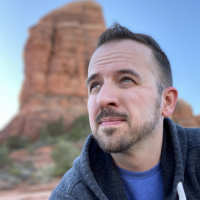 I looked out the window during a rainstorm yesterday and saw something strange. Aaron had been painting the trim on the back of the house and didn't lower the ladder before the storm started. Oddly, I don't remember hearing it fall, but I was probably painting with earphones on at the time.

Further investigation revealed it was even more precarious than it looked. Plastic chairs on the porch acted as a wedge that stopped the ladder from falling the rest of the way, sparing the poor baby cherry tree in its path that surely would've lost a branch. The world owed me a miraculous coincidence on stuff falling over, I'd say.